React vs JavaScript - What are the Differences? 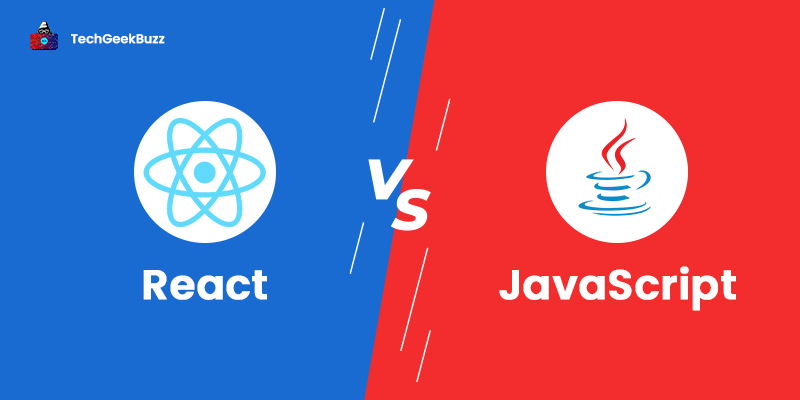 A plethora of technologies, like programming languages, libraries, and frameworks, are available out there that help web developers to create websites and web applications without any hassle. Before creating any website, developers decide upon the programming language and framework to use. Further, they can use libraries as per their development needs.

JavaScript is a popular programming language for web development. More interestingly, it can manage both client-side and server-side development of web applications. So, a question may arise in your mind “What is the need to learn additional frameworks or libraries for web development?”

The answer is using libraries and frameworks saves a lot of development time. Frameworks act as a foundation for your applications, while libraries are prewritten code that you can use directly to accomplish a specific task.

When it comes to web development, React is a popular library among developers. As a novice developer, you may certainly think about why to choose React over JavaScript for developing web applications.

What is React? [Definition]

React is an open-source library based on JavaScript that enables you to create intuitive user interfaces. It forms a base for the Next.js framework for creating single-page applications, server-rendered applications, and mobile applications. In other words, we can say that React is a library for creating reusable UI components.

Moreover, the only function of the React library is state management and rendering that state to DOM . It is not enough to use this library alone for creating applications. Instead, you need to leverage additional libraries for routing and client-side functionality.

Jordan Walke, a software engineer at Meta (formerly Facebook), created the React library. Initially, he released the prototype of React called “FaxJS”. He got the idea of creating React from XHP , an HTML component library for PHP.

In 2011, Meta first deployed this React library on Facebook’s news feed. Later, in 2012, the company deployed it on Instagram. Finally, in May 2013, Facebook released React as open-sourced at ??JSConf US.

After a few years, in 2017, the company announced React Fiber, a collection of internal algorithms for rendering. Since then, React Fiber has served as the foundation for the future development of the React library.

In the same year, the company released React 16.0 to the public. Later in 2020, Meta announced React v17.0. This version was the first major release without any significant changes to React developer-facing API. The current and stable version of React is 18.1, released in April 2022.

The following are the remarkable features of React:

Here are the major benefits of React:

Some of the notable drawbacks of React are as follows:

What is JavaScript? [Definition]

JavaScript is an open-source, dynamic scripting language for web development. Also, it is one of the core technologies of the World Wide Web (WWW). It is a multi-paradigm programming language that complies with the ECMAScript standard. Also, it comes with the application programming interfaces (APIs) to enable you to work with standard data structures, regular expressions, DOM (Document Object Model), text, and dates.

When we use JavaScript to create websites, it automatically changes web content without requiring us to reload the entire web page. Moreover, it is a just-in-time (JIT) compiled language. This means that it compiles the code during the runtime of the program and not before the execution.

Mosaic was the first browser with a graphical user interface (GUI), which played a crucial role in the popularity of the World Wide Web (WWW). Later, Mosaic founded the Netscape Corporation and then created an improvised browser called Netscape Navigator.

However, the websites could only be static previously and were not able to dynamically change their content. This resulted in the need to add the scripting language to Netscape Navigator. For this, the company had only two options, as follows:

The company decided to go with the second option and hired Eich to design a new scripting language that could have a more similar syntax to Java and less similar to Scheme. However, when the Netscape Corporation released the beta version of the language as a part of Navigator, they named it LiveScript. When the company decided to release it officially in December 1995, they renamed it JavaScript.

The following are the noteworthy features of JavaScript:

Some remarkable upsides of JavaScript are as follows:

The following are the downsides of JavaScript:

React vs JavaScript - A Detailed Comparison

Let us now discuss the major differences between React and JavaScript.

As discussed earlier, React leverages virtual DOM. Whenever you update any component, the virtual DOM gets updated. Later, React determines what changes the component undergoes by comparing the updated VDOM with the previous or pre-updated VDOM. After determining, it reflects those changes in the real DOM.

However, VDOM identifies the minimal changes that need to be reflected in the real DOM and updates only those changes. This makes websites faster than the ones developed using plain JavaScript because JavaScript websites require the rendering of the whole DOM.

For creating static websites, JavaScript is the best choice. However, JavaScript is not ideal when your website or web application requires fast loading and major updates to the DOM. In this case, choosing React would be an excellent move because it uses VDOM. VDOM only updates the necessary elements in the real DOM instead of re-rendering the entire DOM.

In website development, there are many cases where you need to repeat certain design patterns. It becomes tedious to write the code for the same task repeatedly. React allows you to write a particular design pattern as a component once and use it whenever you want. However, this is not the case with plain JavaScript.

When it comes to maintenance, component-based websites are easier to maintain. This is because they allow you to change any component and observe the changes without affecting all other components.

React websites or web applications are component-based, while the ones developing using JavaScript are not.

6. UI and Logic of Websites

In the traditional web development process, while HTML and CSS manage the UI of websites, Javascript is responsible for logic. This is not the case with React since every component of a website or web application can handle both UI and logic on its own. This means that React components are capable of managing the structure and logic together on their own.

React vs JavaScript - Which One to Choose?

From the above discussion, we can conclude that React is a good choice when you want to create complex and dynamic web applications or websites. However, if your website or web application is small and simple and does not require complex features, you can go with JavaScript.

Here, we conclude our discussion on the differences between React and JavaScript. While React is a JavaScript-based library, JavaScript is a front-end scripting language. Developers often choose React over JavaScript because it lets them develop high-speed, easy-to-maintain, and component-based web applications and websites.

However, if your website or web application does not require complex features and fast loading, JavaScript is good to go.

We hope that article has helped you gain insights into the difference between React and JavaScript. If you know other differences than the aforementioned ones, do let us know via the comments section.

React is a library for creating user interfaces using JavaScript, whereas JavaScript is a front-end scripting language.

Since React is a JavaScript-based library, there is no way to learn React without JavaScript. You first have to learn JavaScript before learning React.

Yes, JSX makes it easier to embed HTML in React.