FTP vs SFTP: What’s the Difference? 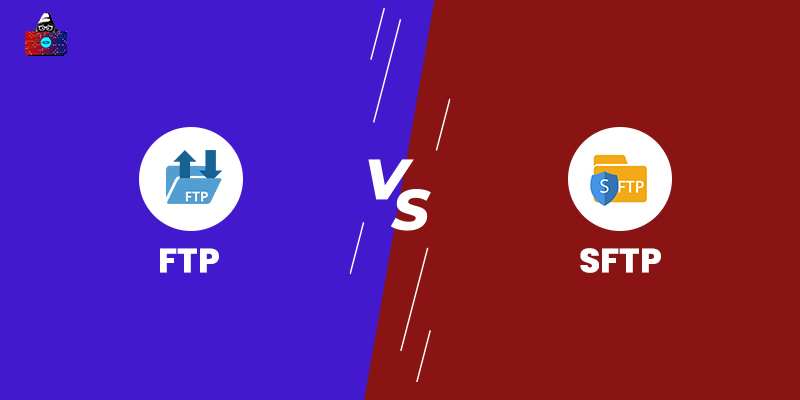 The process of moving or transferring files from one system to another has become commonplace these days in the IT environment. Sharing files has become a part of our everyday life. Many individuals often wonder how file sharing between multiple computer systems takes place.

Well, this is where the file transfer protocols come into the picture. FTP and SFTP are two common and popular mainstays in the file transfer space. FTP stands for File Transfer Protocol, and SFTP stands for SSH File Transfer Protocol. Both FTP and SFTP have the same purpose of transferring files between two hosts, but they use different protocols. FTP runs on top of the TCP/IP protocol, while SFTP over the SSH protocol.

What is FTP? - File Transfer Protocol

File Transfer Protocol (FTP) is a standard communication protocol or network protocol for transferring computer files from a server to a client over Transmission Control Protocol/Internet Protocol (TCP/IP) connections. It is considered the application layer protocol in the TCP/IP suite. FTP follows the client-server architecture . In an FTP session, a local host is generally an end user's computer system, which is a client.

On the other hand, a remote host is the second computer system involved in an FTP transaction, which is a server. Both computers need to be configured well and connected over a network to transmit files via FTP. For file transfer, FTP uses two connections in parallel, namely data connection, and control connection. FTP uses the control connection for transferring control information, like passwords, user identification, commands to store and retrieve files, commands to change the remote directory, etc. It uses the data connection for sending the actual file.

Abhay Bhushan has written the original specification for the File Transfer Protocol. He published that specification as RFC 11 in April 1971. Until 1980, FTP ran on the Network Control Program (NCP). NCP is the predecessor of TCP/IP. In 1980, RFC 11 was replaced by a TCP/IP version, RFC 765. Later, in 1985, RFC 765 was replaced by RFC 959, which is the current specification.

The following are the salient features of FTP:

The following are the remarkable benefits of FTP:

The significant drawbacks of FTP are as follows:

When to Choose FTP?

When you want your users to connect anonymously to the server over the internet, you can choose FTP.

SSH File Transfer Protocol (SFTP) is a secure file transfer protocol for transferring files between the client and server over the internet. In other terms, SFTP is a network protocol that enables access, transfer, and management of files over any reliable data stream.

SFTP protocol runs on the SSH (Secure Shell) protocol and follows the full security and authentication functionality of SSH. It provides all functionalities that FTP offers but with more reliability, security, and easy configuration. It protects against various attacks, such as man-in-the-middle (MITM) and password sniffing. Moreover, SFTP uses encryption and cryptographic hash functions, which ensures the integrity of data being transferred. It authenticates the server and the user.

With the SFTP protocol, a number of operations can be performed on remote files. As a result, it is more like to be a remote file system protocol. Some additional capabilities of the SFTP’s client include directory listing, resuming interrupted transfers, and remote file removal.

The Internet Engineering Task Force (IETF) designed SFTP as an extension of the Secure Shell (SSH) protocol version 2.0. The primary aim of designing SFTP was to provide secure file transfer capabilities to the SSH protocol. Initially, before the involvement of IETF, SFTP was a proprietary protocol of SSH Communications Security. Tatu Ylönen and Sami Lehtinen designed the proprietary protocol, SFTP, in 1997.

Here are the notable features of SFTP:

The following are the advantages of SFTP:

The disadvantages of SFTP are as follows:

When to Choose SFTP?

When the security of data is your priority, you can choose SFTP for transferring files between two hosts.

The following table highlights the major differences between FTP and SFTP:

FTP vs SFTP: Which is Better?

Now that we have discussed what FTP and SFTP are, their features, pros, cons, and the differences between them, it is time to decide which one is better. Well, both protocols share the similar purpose of transferring files between two hosts but follow different approaches. If your data has sensitive information and security is of the utmost significance, choosing SFTP over FTP would be an excellent move.

However, SFTP is slower than FTP because of the security built into it. Also, it transfers encrypted data, which takes time. Being reliant on the SSH protocol, SFTP requires authentication. Therefore, it is not the perfect choice when you want users to connect anonymously. For this purpose, you need to choose FTP.

FTP and SFTP are two popular protocols for transferring files between two computer systems or hosts over the internet. The major difference between these two protocols is that SFTP is a secure file transfer protocol that sends encrypted data. On the contrary, the transmission in FTP is not encrypted. Therefore, it is always better to choose SFTP over FTP when security is the priority. But when it comes to speed, FTP outperforms SFTP.

We hope that this article has helped you gain enough understanding of how FTP and SFTP differ from each other. If you have any doubts regarding this topic, feel free to share them in the comments section below.

SSH File Transfer Protocol (SFTP) is more secure than FTP because it follows the SSH protocol. It encrypts data that is being transmitted over the SSH data stream. Therefore, from the authentication of users to actual files, everything is unreadable as they are encrypted.

File Transfer Protocol (FTP) is a communication protocol that is known for its exceptional speed. Also, it is faster than SFTP. Due to the added security in SFTP, it tends to transfer data slower than FTP. Another reason for SFTP to be slow is that it sends encrypted data, which requires more time to transfer.