HTML vs JavaScript - What Are The Differences? 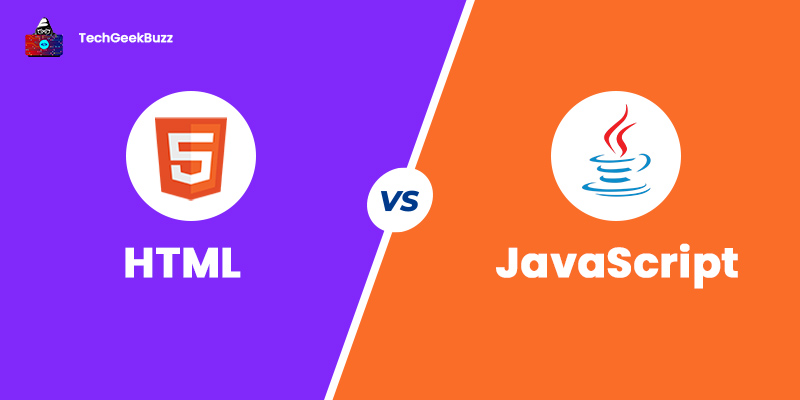 HTML and Javascript are the two core technologies of the World Web Wide (WWW), alongside CSS. The former is a markup language for creating web pages or web applications, whereas the latter is a high-level scripting language that makes web pages more interactive and dynamic.

Both HTML and JavaScript are the foundational languages for creating any modern website or web application. Also, it is possible to embed JavaScript programs into the HTML code to convert the static web content into a dynamic one. This means that it manipulates or modifies content on web pages without the need to reload them.

HTML is an acronym for HyperText Markup Language. It is a markup language that web developers use to create documents to display them in web browsers. In simple terms, it is the standard markup language for creating web pages. It lets you design and organize paragraphs, sections, and links using HTML elements, tags, and attributes.

Web developers often use HTML with CSS (Cascading Style Sheet) and JavaScript to create responsive websites and web applications. HTML provides the structure to websites through its elements. In other words, HTML comes with various elements that serve as building blocks for websites.

Many people refer to HTML as a programming language. However, it is not true because it is a markup language and cannot create any dynamic functionality. Another important thing to note is that HTML is an official web standard, and W3C (World Wide Web Consortium) is responsible for maintaining and updating its specifications.

Tim Berners-Lee, in 1990, designed HTML. His idea was to create a system so it would be easier for the researchers at CERN to store and share documents. These documents would be stored on a server, and it would be possible for researchers to access them through a web browser.

After a long time, in 1989, he proposed a memo that described the internet-based hypertext system. Later, he specified HTML and created a server and software for the same in 1990.

Along with Tim Berners-Lee, there was another data systems engineer Robert Cailliau at CERN who requested funding at CERN for creating a hypertext system. However, CERN rejected it at that time.

Later in 1991, Tim Berners-Lee publicly released the description of HTML through a document named ‘HTML Tags’. This document included 18 elements, out of which 11 are still present in HTML 4.

The year 1995 witnessed the release of HTML 2.0, which included all the features of HTML 1.0 and some additional features. In 1997, HTML 3.2 was released as a W3C recommendation. It was the first version of HTML standardized by W3C. Also, HTML started supporting CSS from this version.

The following are the remarkable features of HTML:

Some of the notable upsides of HTML are as follows:

Here are the significant downsides of HTML:

JavaScript or JS is a client-side scripting language combined with HTML and CSS to create responsive web pages or websites. It provides dynamic behavior to web pages that would not be possible only with HTML and CSS . With JavaScript, developers can use animations on web pages, create dynamic content, animate images, control multimedia, and many more.

Besides web development, JavaScript also has its application in game development, server applications, web servers, etc. Moreover, it is a dynamic, high-level, and multi-paradigm scripting language. It is a just-in-time compiled language that complies with the ECMA standard.

In the initial stages of the Web, since its inception, the web pages were only static. They would not have dynamic behavior. As a result, it was necessary to make web pages dynamic. In 1995, Netscape decided to introduce a scripting language for the Netscape Navigator , a web browser developed by the Netscape Corporation.

To do so, Netscape had only two options. One was to collaborate with Sun Microsystems to incorporate the Java language, and the other was to hire ??Brendan Eich to create a new language. They decided to go with the second one, where they hired Eich to design a new language whose syntax would be similar to Java and less like other scripting languages.

Eich designed the new language and its interpreter and named it LiveScript. Later, Netscape changed its name to JavaScript and released it publicly in 1995.

The following are the remarkable features of JavaScript:

Some of the notable benefits of JavaScript include:

Here are the significant drawbacks of JavaScript:

HTML vs JavaScript - A Head-to-Head Comparison

The following table describes a head-to-head comparison between HTML and JavaScript:

HTML vs JavaScript - Which One to Choose?

Now that we know the differences between HTML and JavaScript, we can conclude that both these languages serve different purposes. Therefore, there is no scope to decide which one is better than the other.

While HTML is a markup language that provides structure to a website, JavaScript is a scripting language that manages the behavior of web pages.

Using only HTML, you can create static web pages. It is ideal to use when your website does not require any changes. On the flip side, JavaScript helps developers create dynamic websites, i.e., the content on web pages gets automatically changed as per the end user’s actions, without the need to reload the web pages.

This was all about the major differences between HTML and JavaScript. Both are the essential and foundational technologies of web development. They go well together to create dynamic and responsive websites. HTML manages the structure and design of a website, while JavaScript manages the website's content, i.e., converts static web content into dynamic.

In simple terms, HTML defines how a web page should visually appear, whereas JavaScript allows users to interact with web pages.

It is essential for every beginner to learn web development basics first. Therefore, it is ideal for learning HTML before JavaScript. If you don’t know how to structure a website, there is no point in learning JavaScript first to make your website interactive. However, you can learn JavaScript without HTML and CSS using Node.js and become a back-end developer.

Yes, HTML is required for JavaScript. It offers all the essential building blocks for creating a website. Along with it, CSS is also essential to style elements on HTML pages. Therefore, JavaScript comes after HTML and CSS.