Python vs C: Differences You Should Know 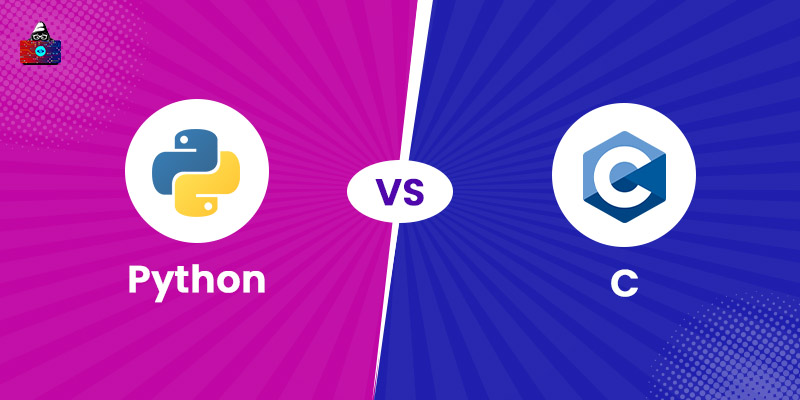 A plethora of programming languages is available out there. Therefore, one of the most common questions that arise in the minds of beginners in the field of computer programming is - which language to choose?

Since beginners always want to learn easy and simple programming languages at the onset of their careers, C and Python are the most preferred languages for them. C is an older language than Python. However, Python is more popular than C these days due to its features. Therefore, before choosing between Python and C, it is essential for novices to understand the differences between the two programming languages.

Well, this article will help you to understand all the key differences between Python and C. It will also make you familiar with Python and C individually, along with their features, upsides, and downsides. So, let us get started!

Python is an interpreted, general-purpose, and high-level programming language. It follows multiple programming paradigms, such as object-oriented, functional, structured, and procedural. This language primarily emphasizes code readability with its indentation. It does not use semicolons after the end of a statement or braces to delimit blocks.

The syntax of Python is pretty simple and easy to understand since it involves simple English keywords. The document, The Zen of Python, includes Python’s core philosophy, as listed below:

Python is a garbage-collected and dynamically typed programming language. Due to Python’s comprehensive standard library, it is often called the ‘batteries included’ language. This standard library of Python has two modules, namely itertools and functools that can implement functional tools from Haskell and Standard ML.

Python is the successor of the ABC programming language. Guido Van Rossum started developing Python in the late 1980s at Centrum Wiskunde & Informatica (CWI) in the Netherlands and released it in 1991 as Python 0.9.0. In October 2000, he released Python 2.0 with many new features, including support for Unicode, memory management, and cycle-detecting garbage collector.

In December 2008, Rossum released Python 3.0, which turned out to be a significant revision to the Python language that was not completely backward-compatible. It includes a 2to3 utility that automates the translation of Python 2 code to Python 3.

Furthermore, in 2020, Python 2.7 was discontinued, and only Python 3.6.x and later versions are supported now. The latest version of Python is 3.10, released in January 2022.

Here are the salient features of Python :

Let us now have a look at some significant benefits of Python.

The following are the drawbacks of Python:

When to Choose Python?

When you need to develop robust web applications, mobile applications, video games, artificial intelligence models, and machine learning-enabled systems, choosing Python is an excellent move. In addition, Python is also a popular language among data scientists when it comes to data analysis and data visualization.

Moreover, C is called a mother language because most of the modern programming languages, like C++, Java, C#, etc., follow the C syntax. Also, most of the compilers, Java Virtual Machines (JVMs), and Kernels are developed in C. In short, we can define the C language as:

To learn and master the C language, you can buy the course here.

Later, he created a cut-down version of the BPCL system programming language. He changed the syntax to make it less wordy and produced something more simple, B. However, he wrote some utilities in B which were too slow.

Dennis Ritchie designed the C language as a successor to the B language between 1972 and 1973 at Bell Labs. In 1972, he started improving the B language by adding data typing for variables, which resulted in the creation of the C programming language. The primary motive for developing C was to construct utilities running on UNIX.

Over time, C gained massive popularity and became one of the most widely used programming languages. In 1978, Brian Kernighan and Dennis Ritchie published the first edition of the book, The C Programming Language. This was well-known to C programmers as K&R. It is also called C78, as it got published in 1978. In 1989, ANSI and the International Organization for Standardization (ISO) standardized the C language.

Following are the remarkable features of C:

The following are the key benefits of C:

Here are some downsides of C:

When to Choose C?

When you need to develop system applications, desktop applications, hardware applications, operating systems, embedded systems, new programming platforms, databases, and compilers, C is one of the most preferred choices. Therefore, we can say that C is used in both hardware and software development.

Python vs C: A Head to Head Comparison

Here is a comprehensive comparison of Python and C languages to help you select the best one for your project:

Python vs C: Which is Better?

Both C and Python are general-purpose programming languages and are used for developing various applications. The primary difference between Python and C is that Python is an object-oriented and multi-paradigm programming language, whereas C is a procedural and structural language.

Since Python is a general-purpose programming language, you can use it for machine learning, web development, artificial intelligence, mobile application development, operating systems, and video game development.

On the flip side, C is primarily preferred to develop hardware applications, such as operating systems, network drivers, etc. In terms of performance, Python is slow as compared to C since it is an interpreted language and takes time to read and execute code line by line. But It has a simpler and more easy-to-understand syntax than C, as it uses simple English keywords.

Therefore, Python is an ideal language to choose when the requirement is for faster development and a beginner-friendly language. However, there is no beating C if your requirements include building OS architecture, performing any processor-intensive task, and designing hardware applications.

Python and C are popular programming languages and each one of them has its own features, pros and cons, and use cases. Choosing C would be a great choice if you want to build hardware applications.

On the contrary, Python is a general-purpose programming language used for the development of mobile applications, web projects, video games, artificial intelligence models, and machine learning models. Therefore, we recommend you pick one between Python and C depending on your project requirements.

We hope the above comparison of C and Python has helped you develop a clear idea of when to choose Python and when to use C. You can post your queries or suggestions in the comments section below.

Yes, C is faster than Python because it is a compiled language, whereas Python is an interpreted language that executes code line by line and stops execution upon encountering an error.

Yes, Python is a beginner-friendly language because its syntax is pretty easy that includes simple English keywords. Also, it eliminates the need for delimiters, such as semicolons and curly brackets.

Python is a general-purpose language used for developing software and web applications, automating tasks, and performing data analysis and visualizations.