What is Programming? [A Complete Beginner's Guide] 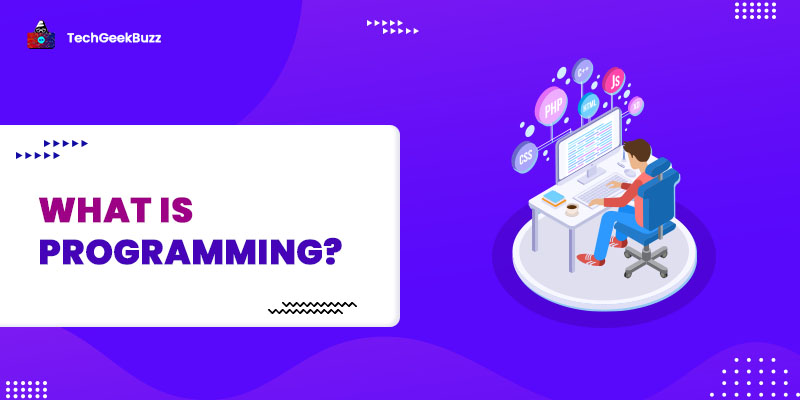 Programming is the sophisticated practice of creating software by means of one or many programming languages and other technologies and tools. It is an intricate, demanding process that involves a number of sub-processes to reach its end goal, which is to create a high-performant and useful piece of software.

Today, learning programming is not a difficult task. Thanks to the advent of programming languages like Python, anyone can get started with programming easily. Despite being central to computer science, it isn’t just confined to information technology and its sister branches.

It is a multifaceted discipline that has spawned out to numerous industries, ranging from manufacturing and logistics to space research and aviation.

It is the practice of structuring or arranging a set of instructions that instruct or direct a computer system to carry out certain tasks. Now let us break the definition into two parts and understand it in-depth.

So, we can say programming is an approach to telling computers what to do and how to do it.

What is a Programming Language?

Why Do We Need Programming?

Programming makes a lot of daily activities easy and fast. Also, it automates boring, time-consuming, and tedious tasks. Today, computer programs are available for almost every daily activity we perform, from communicating with friends and families to booking an online flight or railway tickets. In short, programming plays a vital role in making human lives making better than ever before.

Here are some examples that demonstrate the usefulness of computer programs in human lives:

Why Should You Learn Programming?

Now that you know what programming is and what its need is in today's life. Now, you might be wondering why should you learn programming. Here are some of the major reasons:

In simple terms, we can define a programming paradigm as an approach to solving a particular problem using a suitable programming language and the available tools and techniques.

This programming paradigm has a close relation to machine architecture and is based on Von Neumann architecture. It works by leveraging the assignment statements to change a program's state. A computer program written in a programming language that follows the imperative paradigm consists of numerous instructions for computer systems to carry out. Moroever, the primary focus of this paradigm is how to accomplish the task.

This programming paradigm focuses on creating the structure and elements of computer programs. Rather than describing the control flow of computation, it describes its logic. It emphasizes what a computer program should accomplish and not how. This means that declaring programming concentrates on what has to be done and not on how it has to be done.

Three different types of declarative programming paradigms are as follows:

Usually, programming and coding are interchangeable terms. This, however, is not factually correct. While coding is the specific practice of writing code, programming has a much wider definition. It isn’t limited just to writing code. Programming is an umbrella term for everything ranging from brainstorming ideas for implementing and writing code to testing and maintenance of a computer program. As such, coding is a subset of programming.

If you wish to explore more differences between programming and coding, you can refer to our blog: Coding vs Programming .

Programming is one of the most lucrative career options in the modern world. It, however, demands dedication, passion, perseverance, and much more. A programmer needs to stay abreast of all, or most, of the latest happenings and developments of the programming world, learn continually, and practice a lot. It’s true that no one can become a super programmer in a single day or, in fact, in a year or so.

To develop an architect-level mastery over programming, years and years of unbending will is required. If you have what it takes to be a programmer, better get started today!

The two broad categories of programming are imperative and declarative.

The three types of imperative programming are Procedural, Object-Oriented, and Parallel Processing.

The three types of declarative programming are Function, Logical, and Database-driven.