What is Web Technology? 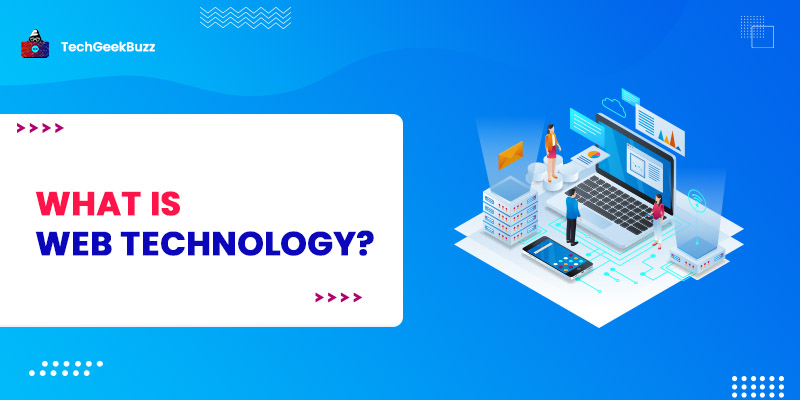 Ever since the computer and internet have taken over our lives, web technology has been evolving and upgrading, but what is web technology? It is a mechanism by which computers communicate with each other and the web servers with the aid of markup languages and multimedia packages. With the help of web technology, one can build a communication platform with different functionalities and utilities using programming languages.

In real-life scenarios, web technology provides higher and faster mutual device communication, thereby bringing optimal automation. Being aware of web technology definition is essential in today's world because the internet has become an indispensable part of our personal and professional lives. Web technologies enable you to reach many people at once.

Its increased integration with today’s world has made it vital to imbibe and configure. Let’s walk through the different areas of web technology to comprehend the same.

What is Web Technology? Top 9 Aspects

Browsers are the connecting links between users and the web. When users search a query on browsers, these fetch the most relevant results from the web and display the same. We command the web browser to fetch the specific information for us and Bingo! They crawl the web and give us the most reliable and relatable information concerning our query.

Web browsers can be referred to as an interpreter that works for the web. Currently, the most popular browsers are Google Chrome, Mozilla Firefox , Microsoft Edge, and Safari.

HTML or Hypertext Markup language is a markup language enabling easy modifications in the representations of web pages and is one of the first things you should learn. Thanks to HTML, web browsers know what to show on the screen once the user request is received. To get the most out of HTML, implementing CSS is paramount.

CSS refers to Cascading Style Sheets and aids in how HTML elements are to be displayed on the screen. If you browse enough tutorials, you can soon create CSS text effects and can add basic image hover effects, page transitions, and more. If you are a beginner in web development, learning HTML and CSS can be your first smart move.

Angular is the web technology that is developed specifically for building dynamic web applications. Using this framework, it is straightforward to construct the front-end of applications without even using other frameworks or plugins. Features include well-formed templates, MVC architecture , code generation, and code splitting. In addition, all expressions are like code snippets enclosed within curly braces, and it doesn't use any loops or conditional statements.

If you want to get the job done with minimal effort, opt for Ruby on Rails. It is effortless and fast to build an app with Ruby on Rails. The reusability of the code, along with some other great features, establishes its popularity in the market. Its scalability and ease of use make it a valuable asset for web developers.

Yii is an open-source PHP web application development framework. It is optimized for performance and comes with many extra tools for debugging and app testing. It often gets easily imbibed by developers and web techies.

Developed in Node.js, Express.js is an app development framework perfect for developers who need to build apps and APIs rapidly. Lots of superb features are provided via plugins.

Zend Framework, now known as Laminas Project, is also an open-source framework based on PHP, and it focuses primarily on security, reliable services, and web applications. Top-listed technologies, such as Laravel and Magento were built using the Zend Framework.

Written in Python, Django is among the most popular web frameworks . It follows the MVC architecture. It makes the app development process much more accessible, thanks to its simplicity. Furthermore, it provides various tools to make the life of a web app developer easy.

Laravel is one of the most popular PHP frameworks used for building small websites. It provides many valuable features like MVC support, object-oriented libraries, database migration, and authorization techniques. Currently, it is one of the most supported and developed web frameworks out there. As PHP has one of the largest communities, Laravel is powering both small websites and large-scale B2B web apps. It is a reliable and quality delivery tool assisting in managing millions of transactions per day.

Web protocols are a set of rules for passing information back and forth between computers and devices. To maintain efficient communication over the web, these rules need to be followed stringently:

HTTP or Hypertext transfer protocol works around 2 important arenas: the process of transferring a client’s request to servers and the process of relaying information for the client. Thanks to this protocol, every website can be served via the browser.

With the help of WebSocket , you can create a consistent and stable connection between the client and the server. As a result, website updates can be observed in real-time without having to refresh the browser.

Used mainly for the APIs, this protocol has standard methods like GET, POST, and PUT that allow information to be exchanged between applications.

An API, a contraction for application programming interface, refers to a programming code that enables data transmission between two software. In addition, it contains the terms and conditions of this data exchange. It is easier to develop computer programs using stable APIs by providing all the building blocks that the programmer puts together.

Data is stored as a structure called a data format. For example, JSON is used to store and exchange data (exactly like the XML format). XML, a format provided by Microsoft systems, used to be the most popular data format.

All users of an application are called clients. Clients can be anything, computers, mobile devices, and tablets. Typically, multiple clients interact with the same app stored on the server at the same time.

All the data and code of an application are usually stored on the server. Clients make requests to servers, and servers respond to those requests after collecting the requested information from the web.

How to Know Which Web Technology is Right for You?

The process of making choices among the available alternatives of web technology could be complicated and cumbersome. To rectify the options, one can consider the following points:

The first and foremost important point that needs to be considered is personal requirements. Next is the way you want to serve your customers. Choose the right technology based on your needs and requirements. For example, if your business is operating on a large scale and you want an independent platform for your particular project, Java is the best option.

Personal requirements also include your budget and market. Newly developed technologies are usually costlier as compared to old ones. For Example, Java experts are ubiquitous, but python experts are rare.

Security is a key point that needs to be considered during the selection process of web technologies. If your project is not secured, you will face legal and financial crises. To ensure the proper security of your service, you need to run a security test on both front-end and back-end servers. Not all the available securities are equally safe, so choose carefully.

If you desire rapid growth, you must choose a web technology that can scale sufficiently. Scalability helps developers to add features and updates quickly. Scalability plays a major role when one needs to modify or update the app version rigorously. If you choose non-scalable web technology, adding modifications will seem a daunting task.

Each new goal requires using a different (set of) technology, and choosing the right one is not an easy task, but if you keep in mind the choice of making technology components as discussed above, it becomes simple. So choose the right technology and start exploring new solutions for the complex problems of the web.

Web technologies play a very vital role in this digital epoch. Without them, it would not have been possible to create web applications or websites.