Best Way to Learn Swift- A Quick Guide for Beginners 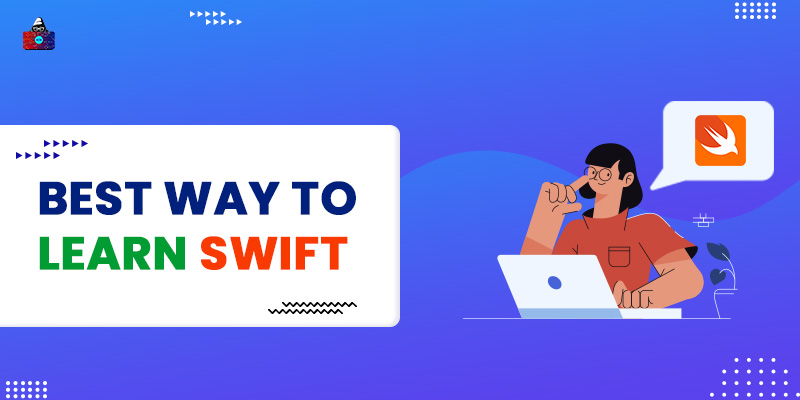 Swift is a popular programming language introduced by Apple in 2014. It is suitable for creating applications for Mac, iPhone, Apple Watch, and iPad devices. There are various popular applications developed with Swift for Apple devices, such as Spotify, Instagram, and YouTube.

This programming language is easy to learn and use even by beginners as it has a simple and expressive syntax. However, many individuals often find it difficult to figure out how to start learning Swift.

Well, this article highlights a simple yet effective way for beginners to learn Swift in the most effortless way. So, let’s get started!

Is it Difficult to Get Along with Swift?

Swift is easy to understand as it has a simple syntax that is understandable even by beginners. But, yes, you need to invest some time to learn all its concepts and practice them by working on some projects. You can go through various tutorials and explore documentation sites that will make it easier for you to learn Swift. Swift is a beginner-friendly programming language, thus it is easy to understand and troubleshoot the Swift code. Usually, it takes one to two months to learn the basics of Swift.

How to Start Learning Swift?

The following are some tips that will come in handy for you to start learning the Swift programming language.

First, you need to focus on developing all the relevant skills that are required for learning Swift and working with it. For instance, you should become familiar with various tools required for developing applications with Swift. Also, you should prepare yourself mentally for constant learning as there’s always something new to learn even if you are working as a professional developer.

Moreover, to be a successful programmer, you need to enhance your problem-solving skills because the main intent of developing applications is to tackle some real-world problems.

2. Learn all the Essential Concepts

Before you start learning Swift you need various tools, such as Xcode, which is an integrated development environment (IDE) developed by Apple. You can go through the official documentation of Swift to learn all its concepts, ranging from basic level to advanced level. Nonetheless, as a beginner, you need to cover all the following concepts:

With the help of an array, you will be able to store a list of values. You can use a dictionary for storing a list of labels along with a list of values where the data is stored as a key-value pair. While learning arrays and dictionaries, you will become familiar with the following topics:

Functions are created for executing a specific task in a program , and a function can be reused in any part of the code; you simply need to call the function that you have defined already somewhere within the code.

While working with functions in the Swift programming language, you will learn the following topics:

As Swift follows object-oriented programming , it allows you to create and work on classes and structures. Classes make the code more readable and eliminate the need to write the same code again and again. With structures, developers can create their customized data types.

Following are some of the topics that you will come across while learning classes and structures in Swift:

Apart from the above resources, you can take the help of the Swift playgrounds application that has been developed by Apple to help you learn Swift in an interactive way. You can work on various problems available on this application to understand the basics of Swift. Also, you can also join developer communities to get help for issues that you may face while working with Swift. Some popular developer communities are listed as follows:

Swift has gained much popularity since its introduction, and many developers are moving towards Swift to create innovative applications for Apple devices. Despite being a relatively new programming language, you will get a wide pool of online and offline resources to learn the concepts of Swift and implement them to create real-world applications. Also, it is advisable to opt for certifications and bootcamps as they not only help you learn Swift but also make you more noticeable to recruiters.

Buy the course here to learn Swift from scratch and become a fully-fledged iOS developer.

Swift is one of the most popular programming languages for iOS development. Since the popularity of iOS applications is expanding, it is worth learning Swift in 2022 and becoming an iOS developer.

Swift is both a front-end and backend language. You can use it to develop software applications that run on both the client and the server.

Swift is more analogous to Python and Ruby than Objective-C. Like Python, Swift also does not use semicolons to delimit a sentence.