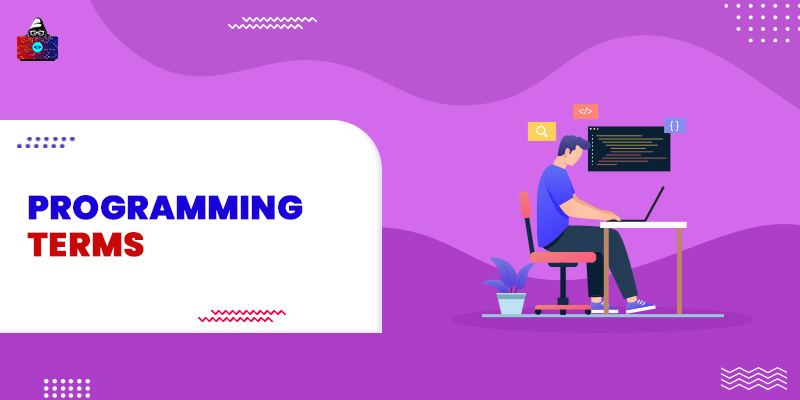 Computer programming is one of the most in-demand skills, and there is a broad spectrum of job roles whose primary requirement is programming. Also, many tech giants, like Google, Facebook, Apple, and many others, hire professional programmers.

If you are into programming and want to become a programmer, you need to be aware of the basic programming terminologies.

This article intends to familiarize you with the top programming terms that you should know before starting to learn to program. However, let’s first take a look at the basic definition of computer programming.

What is Computer Programming?

To understand better what a computer program is, here are some examples:

Coding is a process of developing or writing an executable computer program using programming languages that instruct computers how to behave or work. It does not encompass only the task of writing computer programs but also involves several other tasks.

There are three phases in coding, namely problem-solving, implementation, and maintenance.

Functional programming is a programming model that primarily focuses on ‘what to solve’, instead of focusing on ‘how to solve’. It is a way of writing a software program by creating pure functions. Its primary focus is on the expressions and declarations rather than the execution of statements. The output of a functional program depends on the arguments passed to a function.

An algorithm in computer programming is a set of sequential instructions used to solve a specific problem. We can think of an algorithm as a step-by-step guide to accomplish a particular task. We can write an algorithm in a simple and understandable English language.

A data type in computer programming is simply a type or attribute of data that informs a compiler or interpreter about how a programmer wants to use that data. As humans, we can understand the difference between numbers and characters, but computers cannot differentiate. Therefore, for computers to understand the type of data it receives, we use data types.

A function is a separate block of organized code intended to perform a specific task. It takes input, processes it, and produces output. It is ideal to use functions in a software program when it is required to implement the same functionality at multiple places. Instead of repeatedly writing the same code, we can create a function for that functionality once and call it wherever required in a program. The basic form of a function is:

A parameter is a variable defined during the declaration of a function. It is always defined with its data type and receives an argument passed during a functional call. To understand what a parameter is, let us take one example. Consider a function, sum(), to calculate the sum of two numbers. The two numbers whose sum is to be calculated are called parameters. We define these numbers while declaring the function, sum().

Arguments, also referred to as actual parameters, are values that are passed to a function when it is called. Each argument is assigned to a parameter when a function is called. We use arguments in a function call statement to pass values from the calling function to the receiving function. Let us write a simple C++ program to calculate the sum of two numbers to understand what arguments and parameters are.

In the above example, we have a sum() function that calculates the sum of two numbers. Parameters are int a, int b defined while declaring the sum() function. On the other hand, arguments are num1, num2 passed to a function when it is called.

Keywords are pre-defined or reserved words that have special meanings to a compiler. They are part of the syntax, and we cannot use keywords as variable names. Every programming language has its own set of keywords. For example, consider a code of line, int age;. Here, int is a keyword representing the variable ‘age’ of the integer type.

Constants are fixed values, i.e., we cannot change the values of constants anytime during the execution of a program. They can be of any data type, like integer, float, character, or string. Like a variable, a constant is also the name of a memory location that stores a fixed value throughout a program.

A data structure is a format to organize, manage, and store data efficiently such that it becomes easier to access and modify data. Some popular data structures in computer programming are array, lists, stack, graph, linked list, queue, tree, and many more.

An interpreter in computer programming is a special program that executes the source code directly without converting it into low-level or machine-level language. Some popular interpreted programming languages are Python, Perl, and MATLAB.

An identifier is a name assigned to a variable, function, or array in a program. It is a user-defined name consisting of a sequence of letters and digits. An identifier should always begin with either a letter or the underscore (_) symbol. It should not be the same as keywords since keywords are reserved words.

A token is the smallest unit or element of a program, which is meaningful to a compiler. Various types of tokens are keywords, variables, constants, identifiers, special symbols, operators, and strings.

The concept of a loop in computer programming comes into play when we need to execute a particular set of instructions repetitively until a specified condition is met. For example, consider we need to print “Hello everyone” 10 times. Writing separate 10 lines for printing each “Hello everyone” is inconvenient and inefficient.

An expression in computer programming is a combination of operators, variables, and constants. It can consist of one or more operators and operands. For example, A+B*C is an expression, where A, B, and C are operands, and + and * are operators.

A pointer in computer programming is an object that stores the address of a memory location. It refers to a location in memory, and retrieving the value stored at that memory location is referred to as dereferencing a pointer.

Null in computer programming is a value and also a pointer. It represents a character with no value, missing characters, or an end of a string. In other terms, we can define null as a built-in constant with a value of 0.

ASCII stands for American Standard Code for Information Interchange. It is a standard character set for computers and electronic devices. ASCII codes represent text in computers, electronic devices, and telecommunications equipment. It is a 7-bit code containing 128 characters, where each bit represents a unique character. In addition, the ASCII code consists of 0-9 numbers, A-Z lower case and upper-case letters, and some special symbols.

A bug, known as a software bug or computer bug, is an unexpected error or flaw in a computer program. It causes a system to behave unexpectedly and produce inaccurate and unexpected results.

A library is a set of non-volatile resources, such as configuration data, help data, message templates, documentation, pre-written code, and subroutines, values, type specifications, or values. These resources are used for software development. Developers generally use libraries to add specific functionality to a software application.

An exception is an unexpected event occurring during the execution of a software program that disturbs the normal flow of that program’s instructions. One simple example of an exception is when a program tries to access or load a file from the disk, but the file does not exist.

An object in object-oriented programming is an instance of a class. It contains data in the form of fields called attributes and code in the form of procedures known as methods. It provides a structured approach to programming. When we create a class, the memory is not allocated. But when we create an object for that class or instantiate that class, the memory is allocated.

Inheritance in object-oriented programming is a mechanism of creating or deriving new classes from the existing ones to form a hierarchy of classes. The newly created class is referred to as a child class, whereas the class used as the base is called a parent class or base class.

A database is an organized and systematic collection of data stored electronically in computer systems. It serves as a container for data. Database management systems (DBMS) are responsible for managing databases. A database system is referred to as the database, DBMS, and associated applications collectively.

Debugging in computer programming and software development is a process of identifying and fixing bugs or defects that disturbs or prevents the correct operation of a computer program or software.

An integrated development environment (IDE) is a platform that provides various developer tools under one roof to facilitate the software development process. It consists of at least a source code editor, build automation tools, and a debugger. However, many IDEs incorporate a compiler, an interpreter, or both.

A structured query language (SQL) is a domain-specific language used for accessing and manipulating data stored in relational databases . Following are some of the key tasks that one can perform using SQL.

Version control is a component of a software configuration system, and it is also referred to as source control, source code management, and revision control. It is a class of systems that tracks and manages changes made to computer programs, websites, documentation, and other collections of information.

It is important for every novice to know the common programming terms before they start learning to code. As the programming domain is quite extensive, there are several terms associated with it, and having knowledge of them is absolutely essential.

In this article, we have explained some of the most commonly used programming terms, including compter program, object-oriented programming, variable, loop, bug, framework, and API. If you have any queries or suggestions, feel free to share them with us in the comments section below.